In this episode, Joe speaks with Peter Hendricks, Ph.D. and Associate Professor at the University of Alabama, currently involved in researching the effects of psilocybin on people dealing with cocaine-related substance use disorder.

He discusses the details of the pilot trial (following the Johns Hopkins model, with music created by Bill Richards), some early findings and speculations, what music might work best for these sessions, how excited he is to bring these findings to the criminal justice system, and how religion and tribalism come into play when looking at what people get out of these psychedelic experiences.

Hendricks points out that while psilocybin is currently being researched as a treatment for tobacco use (by Matthew Johnson at Johns Hopkins) and alcohol use (by Michael Bogenschutz at NYU), this is the first large study with cocaine and could lead to the first medication for major stimulants. And while there have been many studies on psilocybin in general, they’ve rarely been focused on the people he’s working with, who are often poorer, less educated, often out of work, and usually struggling more than those typically involved in these studies. They also talk about what research of the past has given us data-wise, and how inspirational it has been to the work being done today.

“The participants in our trial- they haven’t read Michael Pollan’s book or others. They’re not in the know. I’ll have to explain to them what the drug is, and the common reaction is, ‘uhh, so you’re going to help me stop getting high by getting me high?’ and I’ll try to explain how the drug might differ from others, from more addictive drugs like cocaine. And as we know, it’s an ineffable experience- it’s a difficult experience to put to words…. I’m honored and I have admiration for our participants because they have the courage to dive into this study conducted at a University by people they’ve never met. It can be a very frightening experience and they say, ‘you know what, I’ve tried everything. At this point, I’m desperate, let’s give it a try.’ I probably couldn’t overstate how much courage it takes for them to do what they do. I don’t know that I could do it myself.”

“I think for most of the world’s fates, the tenants are that we’re all in this together, and we’re bound by love. And that really might be the message that most people get from psychedelics, but similar to religion, sometimes that message is perverted a bit and what you take from it is, ‘my in-group is what’s most important and I’m going to act to preserve my own tribe, even if it means treating others in an awful, inhumane way…’ Sometimes experiences that are really meant to foster a connection with everybody can go haywire and we have to be aware of that”

“One criticism of some of the studies conducted so far has been, how do we know that psilocybin might have these effects on a sample that isn’t all college-educated or doctorates or who are Professors at Universities who make more than 100,000 dollars per year and live comfortably? How do we know that this experience would have any meaning to somebody who’s making less than 10,000 per year, who has a fifth-grade education, who’s unemployed and homeless? I think in large part, this study might answer that question. If we find an effect, then we can say it appears to also have an effect among those who look different and whose life circumstances are much different than some of the earlier participants.” 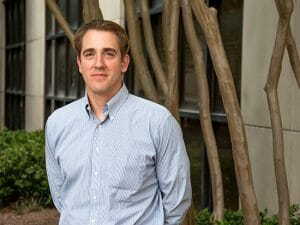 Dr. Hendricks received his doctorate in clinical psychology from the University of South Florida and completed a post-doctoral Fellowship in Drug Abuse Treatment and Services Research at the University of California, San Francisco. His research centers on the development of novel and potentially more effective treatments for substance dependence, with specific areas of focus on tobacco, cocaine, and polysubstance dependence in vulnerable populations.